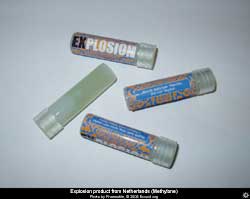 At the end of 2004, a product sold under the brand name Explosion became available in some smart shops in the Netherlands. Marketed to the party crowd, it is sold in tube-shaped bottles of liquid solution as a vanilla-scented "room odorizer" that contains methylone. In early 2005, Explosion also became available for mailorder sale through Dutch smartshop online catalogs. A methylone product sold under the name Inpact may also be available in Japan.

Since its introduction, there have been questions about what Explosion contains. The label does not list the substance or dose. According to one smartshop owner who distributed Explosion, at first, the manufacturer claimed that each bottle contained 280 mg of EMM, a designation used by Shulgin for 4,5-dimethoxy-2-ethoxyamphetamine (PIHKAL 76).

However, the description of the effects of EMM in PIHKAL did not match the experiences of users, and at least one smart shop had the contents analyzed by GC/MS in late January 2005. 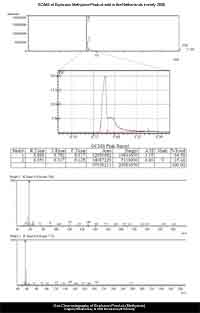 One lab result indicated that the bottle contained methylone, "97.8% pure, the other chemical is 2.2% triphenylphosphine." [2] See the two images from GC/MS done on the Explosion product: GC/MS - 1 and GC/MS - 2.

Confronted with these findings, the manufacturer began selling the bottles as 180 mg methylone. At least one user who had previously tried a measured dose of methylone questions this claim, noting that the effects were closer to what they had experienced with 120 mg methylone.

In March 2005 there was only one manufacturer, so the sample used for analysis is likely to be representative of all bottles that have been sold. We have not seen quantitative data at this time, so speculation remains as to what dose each bottle of Explosion has contained. If you have additional GC/MS or other data related to Explosion to share, or information about Inpact, please let us know at corrections at erowid.org.

In April 2005, the sale of Explosion in the Netherlands came under scrutiny of the Ministry of Public Health, and media reports have suggested that the government may now consider sale and manufacture worthy of prosecution.

Explosion started to work within about 15-20 minutes. It came on pretty much like MDMA. There was whole-body shivering, concentrated breathing, and moderate to extreme euphoria. The euphoria lasted about 2 full hours with the peak lasting until 45-minutes to an hour.... Overall the trip was strikingly close to MDMA, with the highs not as high, the lows not as low and a shorter overall trip....
-- (by geeb, posted 23 January 2005, Drugs-Forum)

THE HAGUE (ANP) - Anyone selling or preparing the new party drug Explosion runs the risk of a jail sentence of a maximum of six years, Minister Hoogervorst (Public Health) wrote Thursday in answer to questions from the Social Democrat (PvDA) party.

He has asked the Health Inspection and detective services to investigate the sale and distribution of Explosion.

According to the Inspection, Explosion is a non-registered drug, and as such may not be sold. The new drug is offered as an air freshener in small vials containing vanilla oil and methylone. Methylone resembles MDMA, the active ingredient of XTC pills, in both chemical structure and effect. Currently not much is known about the mechanism of effect of the drug. Experts are still conducting research into this. For now, the risks appear similar to those of XTC.

The new drug gained publicity at the end of last month after radio presenter Giel Beelen (3FM) used it during a show. The demand for the new drug grew explosively afterwards. Companies that sell the substance on the internet reported last week that their supply had been sold out.

This is the strongest euphoric stimulant available in the Smartshop. Do not underestimate the power of this product. Many compare the effect with their first XTC experience, but without the hangover or depression afterwards. There is also self-control and the product does not make the user overenthusiastic.

Effect:
With intake on an empty stomach, the onset comes very quick. It takes a maximum of 1 hour and 15 minutes, before the first effects begin. Duration of effects: 3 - 6 hours. The consciousness altering effect gives a happy, relaxed, high, floating feeling and a strong desire to make contact, to talk and to intimacy. One becomes more loose. The perception intensifies and music sounds different. The body tingles and a blissful state comes over the user. The effect is constant and does not come in waves as with XTC. The stimulating effect makes energetic, clear minded and alert. Users have a greater stamina and can therefore dance for many hours. During the effect one should take in enough water or other non-alcoholics to avoid dehydration. Jaw tension may occur.

Dosage:
Start of with half a unit. Do not take more than one unit. The taste of the product is very foul to prevent it from being put in someones drink without notice. (this also explains the color) Therefore do not keep the product in your mouth, but flush down instantly with juice or refreshments.

Warning:
Do not combine with alcohol or other drugs. Do not combine with medicines. Especially MAO-inhibitors. Not for sale to minors. Do not use regularly. Keep out of reach of children. Do not use in case of hart or vascular disorders, high blood pressure, pregnancy, nursing, diabetic, asthma, epilepsy or psychological disorders. This product can influence the ability to react. Therefore do not drive or operate machines under the influence. This product makes no health claims and is not a medicine. Store cool.