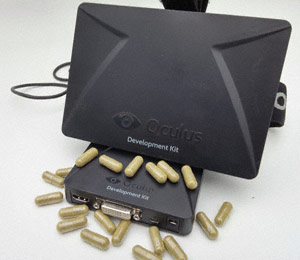 While maneuvering the helicopter in the virtual skies, I could feel the symptoms increasing. Surprisingly, the unease didn't seem to reduce my performance. I was so immersed in the game that I didn't think of ripping the gear off my head to get my feet back on 'solid ground'.

But 15 minutes later, I realized the time had come to remove the headphones and headset and get back to baseline -- at least a kratomed baseline. I sat, unmoving, for a short while before walking into the bedroom (swaying a bit along the way) to explain the symptoms to my wife.

I'd previously experienced a mild form of 'sim sickness' -- think motion sickness but induced by illusory movement -- and I was familiar with the nausea and vomiting that can accompany kratom. Fast movements, such as those I was pulling in the helicopter, are known to trigger sim sickness in some people, though I had never experienced it myself with this particular game. The dose and variety of kratom I'd consumed was well within my safe limits, and wouldn't normally cause any side effects. However, the symptoms from the combination of kratom and VR weren't quite like those produced by either one alone.

I wasn't stoned out of my gourd on kratom -- even if I had been, such behavior would strike me as especially odd. The 2-3 hours I was awake after removing the headgear were punctuated by moments of nausea, and I continued to feel more altered than normal, although the sensation did wane.

The next morning I woke with a minor mental hangover; I didn't feel physically ill, but I didn't feel in balance either, and my thoughts weren't as sharp as they'd be on a normal post-kratom morning.

In hindsight, it wasn't the brightest idea to combine an evolving technology known to induce motion-sickness with a plant linked to similar physical responses. So, for those who use kratom, be warned that it might exacerbate other motion sickness-inducing activities.