This document contains the results and specifics of a study designed to test THC metabolite detection time in urine.

A primitive study was performed to determine the timeline of detectablity of ingested THC. It is generally purported that the ingestion of marijuana is detectable in urine for weeks or even months after ingestion. It has been reported that occasional users purge any detectable levels of THC from their system within 48-72 hours. It is widely accepted that other ingested illicit substances including Cocaine, Methamphetamine, and MDMA are not detectable after 24-48 hours of ingestion, thereby making THC the only illicit drug widely believe to be reliably tested for long term using a urinalysis. This study casts doubt on the validity of drug testing as a reliable means for determining ingestion of illicit substances at all due to the relatively short detection times of any drug.

The study tested one subject using a common and readily available IC urinalysis(ICA) test. On day one(D1) an initial test was performed to ensure that the subject was free of detectable levels of THC. On day two(D2) the subjected ingested THC using the common procedure of smoking dried cannabis using a pipe. Approximately two 'bowls' were smoked over the course of a day, and the subject ingested his last 'hit' at approximately 8pm on day two(D2). After the initial ingestion the subject abstained from any further contact with THC or marijuana for the duration of the study. No special cleansing products were used, no unusual amounts of liquids were consumed, and no adulterants were introduced into the specimen.(*** )

The subject is a 21 year old male 5'7' aprox. 145lbs - occasional marijuana smoker (~1/wk-1/mo) who prior to initial testing abstained from ingesting marijuana(THC) for approximately two weeks before the initial ICA(*1) urinalysis on which he tested negative(-).

The ICA(*1) is a competitive binding immunoassay in which drug and drug metabolites in a urine sample compete with immobilized drug conjugate for limited labeled antibody binding sites. By utilizing antibodies that are specific to different drug classes, the test permits independent, simultaneous detection of two drugs from a single sample. The approximate run time is 5 minutes.

Regardless of the drug levels in the sample, a rose-pink color band is produced in each Control Zone (marked “C”) by a parallel immunochemical reaction. These bands serve as built-in quality control measures by demonstrating antibody recognition, verifying that the reagents are chemically active. Each ICA(*1) contains dye-conjugated antibody and immobilized antigen in protein matrix with sodium azide. The samples were tested by immersing the ICA(*1) test strips in the urine for ~10 seconds congruent with package labeling.

The test is a two panel test purported to detect at the NIDA cutoff levels:

According to the package, the width and opacity of the detection lines indicate nothing about the intherent presence of THC or METH in the urine, though we found on day three a slight presence of a detection line, it was still determined to be a failing test, as the line was so faint as to be inconsequential. It was noted that the on THC panel the urine detection and THC detection lines were consistently lighter than the METH panel lines.

The ICA(*1) consistently showed a negative presence of METH.

Days on which tests are passed are denoted by color, green is a passing test, red is a failed test.

The study showed that in an occasional marijuana smoker that detection times for THC are approximately 24 hours, within 48 hours of ingestion the subject was testing clean(-) Detection times were determined to be so short that it would be possible to ingest THC on a friday and be clean by monday, thereby negating any test given after 48 hours of initial ingestion. 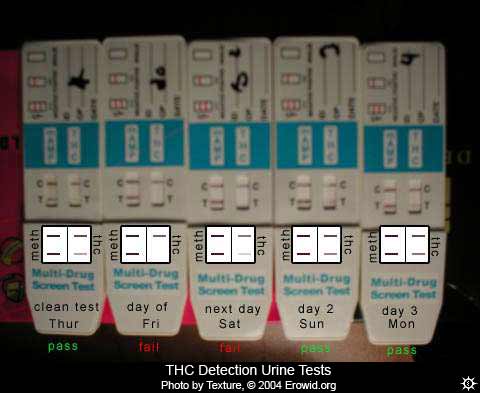