[This report originally appeared as handwritten notes in Book 1, pages 13-19 of the Shulgin Lab Books.]

At 0.8 hrs moderately severe nausea - can be repressed - fades out at 1.3 hrs. At 1.5 hrs first awareness of mescaline-like effects build up slowly to 2 1/2 hrs - start of intensive aggression - 3.0 hrs back down to mescaline effects with only occasional lapses of the intense type feeling - at 7 hrs mental effects essentially gone - able to drive a car rationally.

Eyes closed: mild shape-generation and color motion synthesis - much less than with an effective dosage of mescaline.

In general, very dependent upon the chronological elapsed time. During the bulk of the experiment, some channeling - varying to a walled-in near blindness at the short-duration extreme of the drug. see below.

Depth Perception: During the short duration of the extreme effect of the drug, the range of vision seemed to close in. Probably things at a distance were visible but did not register on the conscious mind. One kept wanting to swing ones hands out and around to keep complete submersion from occurring. This corresponds in time with, and is undoubtedly responsible for part of, the extreme aggressive response discussed below.

Color perception: - slight - at nearly the most intense portion (building up to it) hamburgers were being made (no desire what-so-ever to eat) and the catsup had an intense red, 3 dimensional blood appearance - This was certainly in part a reflection of the murderous mood that was developing - Withdrew from the area quite voluntarily.

Time perception: Time was slowed in proportion to the intensity of the other effects - During the ~1/2 hr of the intense effect, it seemed like many hours.

There is some speech difficulties - but very little patience with these limitations. Slight rubberyness in muscles - attempts at vigorous exertion during and after the intense effects of the drug were underway, were more tiring than usual. Also - there did not appear to be any exceptional strength. Swung a heavy stick against a tree - the spirit was willing but the flesh was weak. Minor teeth chattering.

The mind is frantically active; one is very impatient with the inability to speak easily and quickly ones ideas. One is completely aware that the effects are

due to the drug, but the effects are real and cannot be ignored. Every word and motion is rapidly evaluated, and remains usually unuttered, due to concentration and time required. Response to a direct question is possible, but the suspicions are present as to the secondary motives behind the question.

Herein lies the extraordinary effect of the drug. During the early period of the drug effect, after the nausea, I sat on the davenport and read Bernstein's 'Joy of Music'. To me, every phrase was audible to me, and I found the book exceedingly pleasurable. According to an observer (Alfred) I was pugnacious about the music, (the book), and insisted that one had to have either a knowledge of music theory, or the drug, to appreciate the book. Also - I insisted that Bernstein had had the drug when he wrote the book (condemnation of him musically?)

At about 2 hrs. I listened to music from the radio. Rachmaninoff's 2nd piano concerto was playing (with which I am quite familiar) I curled up under a card table in front of the radio (assumed a embryonic form with head more or less down between legs. The feelings in this extremely pleasant period are very difficult to describe. I was associated intimately with the structure of the music. With my eyes closed, I was suspended, inverted, held by the fine filigree of the music, in a comfortable, prenatal?, chamber. The vigorous scales & arpeggios of the first movement were the chords that supported me from overhead. It was beautiful. After what seemed like an eternity, the movement ended, and I rejoined my observers, and attempted to describe the impressions. The 2nd movement started, and I re-retreated under the card table, lost again in the piano concerto.

After this piece, there was a period of commercials, that set me into a very aggressive state (unfortunate in light of subsequent involvements). I was irritated with the cessation of music. The next selection was 'Slaughter on 5th Avenue' (most, most, unfortunate). It was from this musical selection that I emerged in the extreme psychological state of violence.

For the next 1/2 hr (objective)(subjectively it seemed without end) the violence of action seemed to be the only way of life. (N.S.) mentioned that she had seen many people walking down the street with the same, intense, don't-cross-me-if-you-know-what's-good-for-you-attitude on their faces. Apparently my demeanor was murderous; no observer would object to anything that I said or cross any decision of mine.

It was in this period that I was asked by an observer (Gladys) if I could see in a rose the same mescaline-like colors and textures that I was familiar with. I recognized the similarities. He then asked if I could hurt the flower. Without hesitating I took the blossom and crushed it in my fist, an act that would be normally most difficult to do, and which under mescaline would be impossible, absolutely impossible to do.

At one point Gladys asked me if I thought that I might do well with a tranquilizer (he subsequently admitted that he was concerned as to the extent of my subjugation to the drug) and my response was a veiled threat to push him down the stairs if he tried to 'medicate' me. He did not pursue the subject.

After the intensity of this reaction had subsided, (Gladys) suggested a ride in the car, and my comment was that 'it should be safe, there is a great deal of steel to protect people from me.' We went into the eucalyptus groves behind the Botanical gardens at Cal. It was there that I tried swinging a big stick. (D.E.) I picked up a stone, and mentioned that I could, without hesitation, scratch a gorge in his fender. He inquired why I didn't, and I admitted that I recognized that I would, the next day, have to pay for the damages. It was this reality-awareness that stayed my hand. But I could easily see how another person without this heavily inbred social consciousness, could easily be a vandal. At this point, I had already passed the maximum of the drug, and I could reason in this manner. If I had been confronted with the same situation an hour earlier, I may very well have scraped a nasty gash in his fender.

This drug - to an extent, approximated mescaline in its effects. Try to compare by a graph: 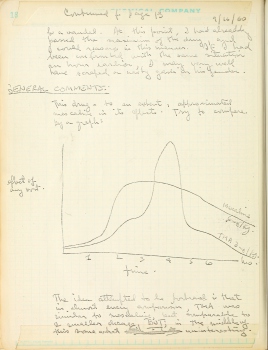 [Erowid Note: Hand drawing of a graph with x and y axes, y axis labeled 'effect of any sort' and x axis labeled 'time' numbered 1 through 6 hours. The curve marked mescaline '6mg/kg' initially goes up higher and comes down more slowly from left to right, where the curve marked TMA 3mg/kg has a higher, sharper peak at 3-5 hours and then drops down to a lower level at 6+ hours than the mescaline line.]

The idea attempted to be portrayed is that in almost every comparison, TMA was similar to mescaline, but comparable to a smaller dosage, BUT in the middle of this somewhat uninteresting exposition there emerged an unexpected effect that was alien to mescaline.

No observer can be objective. I do not know if these effects are the result of the drug:

1) creating an image of an aggressive neurotic in me, and my response can be blamed on an inherent property of the drug; or 2) the drug released a natural, but repressed, facet of my personality, and with another subject, the quality of the response would be completely changed.

These problems can be resolved only with much more extensive experimentation.

TMA has subsequently been employed, primarily under the eye of Hugh, in dose levels of 2.8 to 3.5 mg/Kg on five? assorted subjects. Without exception there was a thorough response, summarized in the Nature paper [by/with] him & Gladys.