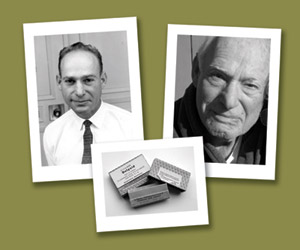 His first LSD trip in 1956 set a new course for Myron Stolaroff's life: he has investigated the beneficial uses of psychedelics ever since that time. In 1961, Myron founded the International Foundation for Advanced Study (IFAS) in Menlo Park, which conducted clinical investigations administering carbogen, LSD, or mescaline to approximately 350 subjects. In 1965, the FDA began to revoke permits for human studies with psychedelics, forcing the conclusion of this research. Between 1970 and 1986, Myron conducted additional personal studies using unscheduled compounds; however, this work ended with the passage of the Controlled Substance Analogue Act of 1986. Since then, Myron has written two books: Thanatos to Eros: 35 Years of Psychedelic Exploration (1994) and The Secret Chief: Conversations with a Pioneer of the Underground Psychedelic Therapy Movement (1997), and he has spoken internationally on the topic of altered states of consciousness. Myron's last presentation was his well-received 2006 talk at the conference in Basel, Switzerland that celebrated his friend Albert Hofmann’s 100th birthday. Now retired, Myron lives in Lone Pine, CA with his wife Jean.

The Stolaroff Collection is a massive archive of letters, articles, books, magazines, trip reports, and ephemera related to psychedelics. In 2009, Erowid began the task of sorting and scanning these materials; as they become digitized, we are posting the trip reports in the Erowid Experience Vaults. Our thanks to Myron and Jean for making these invaluable records available. For more information on Myron Stolaroff, see the Myron Stolaroff Character Vault.
Stolaroff Collection Web Page


Experiences in Stolaroff Collection Collection
Experience Reports are the writings and opinions of the individual authors who submit them.
Some of the activities described are dangerous and/or illegal and none are recommended by Erowid.