salvia
Review Erowid at GreatNonprofits.org!
Help us be a "Top Rated Nonprofit" for the 10th year in a row
and spread info about psychoactive drugs, health, culture, & policies.
("Share Your Story" link. Needs quick login creation but no verification of contact info)
A Survey of Salvia divinorum Users
by Matthew Baggott, with E. & F. Erowid
Erowid Extracts #6
Citation:   Baggott M, Erowid E, Erowid F. "A Survey of Salvia divinorum Users". Erowid Extracts. Jun 2004;6:12-14.
In 2002, Bryan Roth and colleagues published their unexpected discovery that salvinorin A, the primary psychoactive chemical in Salvia divinorum (SD), appears to work through activating the kappa-opioid receptor system. Previously, it had only been known that SD's mechanism of action differed from the classic hallucinogens, although its pharmacology was unknown. The Roth paper transformed the plant from an obscure and puzzling entheogen into a tool for pharmacological research. This tool shows promise in providing new insights into the working of the brain, drug dependence, Alzheimer's disease, psychosis, and the obscure kappa-opioid receptor system.1,2 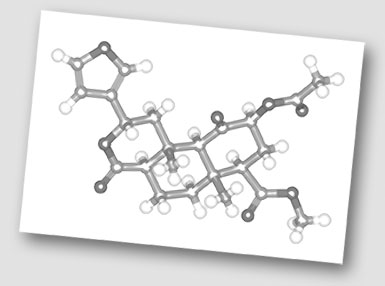 According to this research, salvinorin A binds to and activates kappa-opioid receptors but does not activate the mu-opioid receptor that morphine acts on. Roth et al. confirmed previous research in finding that salvinorin A has "no detectable affinity for the 5-HT2A serotonin receptor and [does] not activate 5-HT2A receptors"1 (where LSD and psilocybin are known to act). The kappa-opioid receptor has been of interest because pharmaceuticals that activate this receptor block pain, yet rats don't self administer them--unlike the mu-opioid agonists (morphine, hydrocodone, etc.).3 These findings suggest that kappa-opioid agonists are less addictive and have a "lower potential for abuse" than mu-opioid agonists. But a major problem is that human research volunteers given kappa-opioid agonist drugs have found the effects disturbing and unpleasant, including strange racing thoughts and other "neuropsychiatric adverse events".4 One research group has used the term "psychotomimetic" to describe their effects.5

Because users of Salvia divinorum are likely to tolerate and possibly even enjoy high doses of SD's kappa agonist, studying its use in humans could provide access to a wealth of untapped information about the kappa-opioid receptor system. It is also important that we learn about SD's effects on humans because there is currently a population using it, and yet very little is known about toxicity and possible physical health risks. The need to better understand SD's potential health risks as well as the function of the kappa-opioid system makes a compelling case for studying SD in humans.

Soon after the Roth work was announced, John Mendelson (a senior researcher with extensive experience in the field of psychoactive drug research) and I sought funding from the National Institutes of Health (NIH) to study Salvia divinorum and its active compound salvinorin A. Our work--formerly at the University of California at San Francisco and now in a newly-forming research center--has focused on administering psychoactives to drug-experienced volunteers. The goal has been to understand the relationship between how the compounds are absorbed, metabolized, and excreted from the body and the effects those compounds produce. We applied for funding and approval to study those who were already using SD, hoping to shed some light on how salvinorin A acts in the human body and to formally characterize its effects.

Very little has been published in the medical and research literature about SD use. In order to develop preliminary data, we collaborated with Erowid.org to survey users of SD. One goal for this preliminary data was to help gather evidence (both for ourselves as well as the FDA and NIH reviewers) that salvinorin A could be safely administered to a small set of experienced users in a lab setting. This provided the primary focus of the survey: consequence of use, lasting effects, and usage patterns.

After approval by our Institutional Review Board (a requirement for university research or surveys involving humans), we decided on a 45-question web-based questionnaire with a target of 500 anonymous respondents. Questions were mostly multiple-choice and numerical-answer with a few open-ended responses. Links were added from SD-related pages on Erowid.org to the Erowid-hosted survey. A summary of both the privacy policy and contact information for the researchers was provided and no identifying personal information was collected. We have presented the preliminary analysis of these data at several scientific conferences including the April 2004 "Towards a Science of Consciousness" conference in Tucson, AZ. What follows is a summary of the presentation. 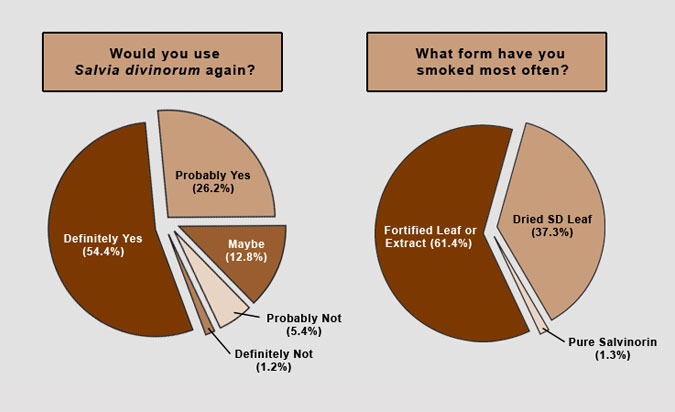 RESULTS
We were pleased and surprised when we reached our target of 500 complete responses within a matter of weeks. In that time, the study questionnaire was viewed 1298 times, with 520 viewers (40.1%) submitting a completed questionnaire. 500 of 520 (96.2%) responses were usable. Data were excluded from analysis if (1) the response was incomplete, (2) the participant reported having previously completed the survey, (3) the participant reported he or she was not fluent in English or had difficulty understanding the questions, (4) another response was submitted from the same computer within ten minutes, or (5) the participant reported no use of SD. 92.6% of respondents were male. It is not clear whether this is representative of SD users or simply those who were willing to participate in our survey. Average age was 23.4 years old (range of 13–68) and 77.4% live in the United States. 80.6% reported they would probably or definitely use SD again.


Nature of Effects:
Because early research with LSD and other psychoactives has shown that people's memory for overwhelming altered states is often very poor, we did not focus on trying to document the acute inebriation. Instead, we asked volunteers to compare SD's effects to those of other methods of altering consciousness. We searched through responses and found several commonalities:

Our survey confirms that most users regard the SD experience as very different from most other inebriants. This is perhaps unsurprising considering the mechanism by which SD acts is unlike those of cannabis or classical serotonergic hallucinogens like LSD. This finding suggests that SD cannot be considered an analog of either hallucinogens or cannabis (as some would have it). If SD is to be made a controlled substance then it will have to be explicitly scheduled.


Duration of Effects:
Estimated duration of effects for smoked or vaporized SD is summarized in the chart shown below. There were insufficient respondents who took SD sublingually (under the tongue) to draw any conclusions about that method.


Persisting Effects:
Many respondents (25.8%) reported improved mood and "antidepressant-like effects" lasting 24 hours or more after use. This is consistent with (or possibly influenced by) a case report published by Karl Hanes.6

In contrast, serious adverse events were rare in this young population. Only 4.4% reported persisting (24 hours or more) negative effects (most often anxiety) on at least one occasion. Three respondents (0.6%) had sought professional help for an SD-related problem on at least one occasion. One went to a priest to discuss Catholicism, while a second visited a therapist. The single respondent who reported seeking emergency treatment had used multiple substances (dimethyltryptamine, dextromethorphan, SD, methamphetamine, diphenhydramine, "etc.") and described what might have been stimulant psychosis. While few serious adverse events were reported by our participants, it is important to realize that the toxicity of new drugs is often only detected as use spreads to greater numbers of people.


Dependence-Related Phenomena:
SD dependence has not been previously reported, although animal studies suggest kappa agonists can induce a withdrawal syndrome comparable to mu agonists.7 We found little evidence of dependence in our survey population. While some reported possible dependence, there were too few of these individuals to interpret their reports with any confidence. 0.6% of respondents reported feeling addicted to or dependent upon SD at some point, while 1.2% reported strong cravings. The standard psychiatric diagnostic system in the United States classifies people as drug dependent based on seven signs and symptoms. When we asked about these signs and symptoms individually, 0.4% reported experiencing three, which could qualify them as dependent (of course a clinical interview would be necessary to confirm this). Interestingly, none of these individuals reported more than 2 of 13 after-effects characteristic of mu-opioid withdrawal (such as increased sweating, gooseflesh, worsened mood, diarrhea, etc.).


Future of Control
Salvia divinorum has been marketed over the web and in smoke shops as a legal intoxicant. Newspaper and television reports have noted that the DEA is tracking the spread of SD use. This raises the question of if, when, and how SD will be made a controlled substance. Overall, salvinorin A seems to be unlike other drugs of abuse and, at least in the individuals responding to our survey, appears to have a low potential for abuse and dependence. Few, if any, seem to consider it a party or club drug. However, it does have potent effects and there is a risk that inebriated users may injure themselves or others. 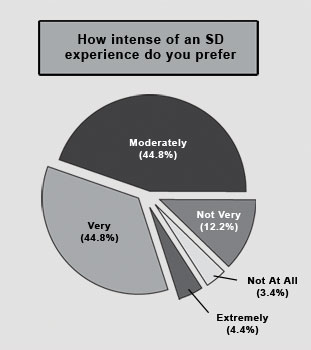 Two scenarios for the scheduling of SD seem plausible. One is that the DEA will wait until several emergency room visits are documented. It seems inevitable that such SD-related visits will occur. Several anecdotal reports describe inebriated individuals walking around in a confused delirium. A second scenario is that SD will be scheduled by Congress, which tends to be more political in its attitudes toward psychoactive substances. It also seems possible that SD will be swept up in an eventual bill targeted at curtailing internet sales of drugs such as pain killers.

Although our first NIH grant application was not funded, we received supportive comments from reviewers and are preparing to resubmit the application. In the interim, we have obtained FDA permission to administer salvinorin A to human volunteers. We hope that the data provided by the participants in this survey will not only inform users and the general public about Salvia divinorum but will also convince reviewers of the importance of clinical studies of this unusual plant.

Matthew Baggott is currently a student in the Neuroscience PhD program at the University of California Berkeley. He has authored a number of scientific articles and book chapters, many of them about MDMA. Baggott has collaborated for years with John Mendelson in clinical psychopharmacology research.