Survey: Hallucinogens & Relationships
Researchers at Columbia University are seeking
responses to an online survey from those who have
used a psychedelic while in a romantic relationship.
Couples especially invited to participate.
Check out the Survey 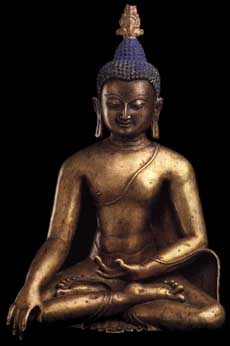 BUDDHISM
"Whatever they want to say, that’s their freedom. I have absolutely no negative feeling I just feel love, like that. I practice, you see: taking others' anger, suspicion, distrust and give them patience, tolerance, and compassion. I practice that." -- the 14th Dalai Lama, 2017
The Buddhist religion originated in India during the 6th century B.C. Founded on the teachings of Siddhartha Gautama (c.563-483 BC), a member of the royal family who renounced his position and wealth to seek enlightenment. Years of searching, using fasting and a variety of other practices, brought him no closer to what he sought. Finally, he sat down beneath a tree, determined not to arise until he found enlightenment. In about 527 BC he reached his goal, and became the Buddha (the enlightened one) also known as Shâkyamuni (the Sage of the Shakya Clan).

In the Buddha's first sermon he presented the Four Noble Truths and The Eightfold Paths:

The primary Buddhist texts are called the Tripitaka (or the "Three Baskets") which consist of the Sutrapitaka (the Buddha's sermons), the Vinayapitaka (the monastic rules), and the Abhidharmapitaka (early philosophical treatises).